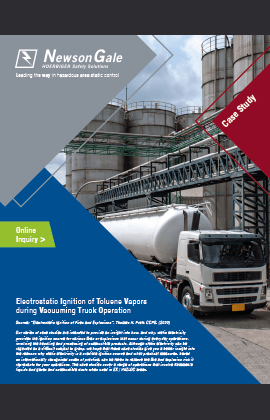 Operation: vacuuming of off-spec toluene from a sump

This case study investigates the causes behind a fire that occurred during a vacuum truck operation. The vacuum truck was deployed to a below grade sump that contained mostly of “off-spec” toluene. As the vacuum truck operation was nearing completion of the removal of the toluene from the sump an ignition of the vapors occurred resulting in a fire. In the ensuing investigation of the incident it was determined that the vacuum truck had not been grounded by the operator. Although other ignition sources would have been considered, the fact that the truck was not grounded and the material being transferred was toluene, it was highly plausible that a static spark was the cause of the fire.

For a static spark to be discharged from the surface of a metal object there needs to be a voltage on the charged object that exceeds the “breakdown voltage” of the surrounding atmosphere. This voltage results from the presence of too many positive or negative charges on the object and simply means that the voltage of the charged object is strong enough to create a conductive channel through the air, to a secondary object. The conductive channel provides a path for the static charges to flow through.

In the split second that the channel is formed, the excess charges rapidly pass through the gap releasing energy in the process. The energy released results in a static spark and if a flammable atmosphere is present in the “spark gap” there is a high probability the energy of the spark will exceed the minimum ignition energy (MIE) of the vapor, gas or dust present in the spark gap.

To create a voltage there needs to be a constant supply of electrical charges to the object being electrified, which in this case is the vacuum truck. Effective grounding of the truck would have provided a means of sending the excess electrical charges to the general mass of the earth (grounding) removing the risk of the truck becoming electrified. In electrical terms this means there was a very high resistance from the chassis/tank of the truck to earth. A constant stream of electrical charge is a current so the more current flowing to the truck, the greater its voltage. But where does this electrical current come from? This is where the vacuuming operation combined with the suction of a material like toluene would have created a “streaming current”.

Toluene has a very high resistivity with the effect that when it comes into rapid and repeated contact with other objects, especially conductive objects like metals, it strips electrons from the other material. This means the toluene carries more negative charge than positive charge. When the charged toluene makes contact with the truck it causes the outer surface of the truck to carry the same amount of negative charge.

In the case of this incident a neoprene hose with an embedded metal wire helix was used. As the metal helix would have been connected to the truck via the metal couplings of the hose, the full length of the hose would have been at the same voltage as the truck. To put some “hard numbers” on the case for static being the source of ignition we need to look at some of the physical characteristics of this operation.

A streaming current for a resistive liquid flowing through a pipe (including hoses) can be estimated from the equation:

It is known that the suction flow rate was 500 gallons per minute which is equivalent to 3.9 metres per second. The internal diameter of the hose was 4 inches which is equivalent to 0.102 metres. Hence the streaming current would have been somewhere in the region of 3 micro-amps (3×10-6 A). It was estimated that the resistance between the truck and ground was at least 1×1010 Ohms. Most of the resistance would have been provided by the truck’s wheels and the asphalt on which the truck was positioned.

The voltage of the truck could be assumed to have reached a level of at least:

As the ignition of the vapors occurred in the sump, the discharge must have been from the hose to the metal rim of the sump. However, in order to prove this theory we must investigate the hose itself. As stated earlier the hose was made from neoprene with an embedded metal wire helix. This means that the metal spiral was not in direct physical contact with any external objects. In addition, neoprene is a high resistivity material with a dielectric strength that is several times greater than air with a typical value of 10,000 volts required per mm of spark gap. The neoprene layer was 2 mm (0.08 in.) in thickness. This would mean that for every millimeter of distance between the metal helix and the metal sump there must have been a high enough voltage to discharge a spark with enough energy to exceed the MIE of the toluene. In order to breakdown the neoprene, at least 20,000 volts must have been present to achieve this. Given that the minimum voltage on the truck-hose system is estimated to be at least 30,000 volts it means an extra 10,000 volts would have been present to discharge from the neoprene surface to the sump. So, at some point in the operation, a gap between the surface of the hose and the sump must have been created resulting in a complete spark being discharged across a gap that had toluene vapors present.

The final part of the jigsaw is the potential energy of the spark itself. We can estimate the amount of energy available for a discharge via the spark from the equation:

If we estimate a low value of 1 nano-farad for the truck’s capacitance value (1×10-9 F) combined with a voltage of 30,000 volts on the truck-hose system at the time of ignition, we can assume a total potential energy of 450 milli-joules, which is far in excess of the MIE of toluene which is 0.24 milli-joules. A certain percentage of the energy would be given off in the form of sound and radial heat, but a significant percentage would have been released in the spark gap, igniting the toluene in the process.

Grounding: getting it right

It’s pretty obvious that not grounding the truck was the single biggest contributor to this fire. However, grounding is not simply connecting the truck to something that looks like it’s entering the ground. Careful consideration needs to be placed on the method of grounding and what parameters can be implemented so that a constant connection to ground is maintained for the duration of the operation. As stated earlier there are many guidance documents that can be followed in relation to providing effective grounding of equipment. In relation to vacuum trucks there are two guidance documents that should be adhered to.

The code of practice outlined in API 2219 recommends the following:

In summary IEC TS 60079-32-1 states that the truck should only be grounded via “designated” grounding points. “Designated” means that the point has been tested and verified as having a direct connection to earth. 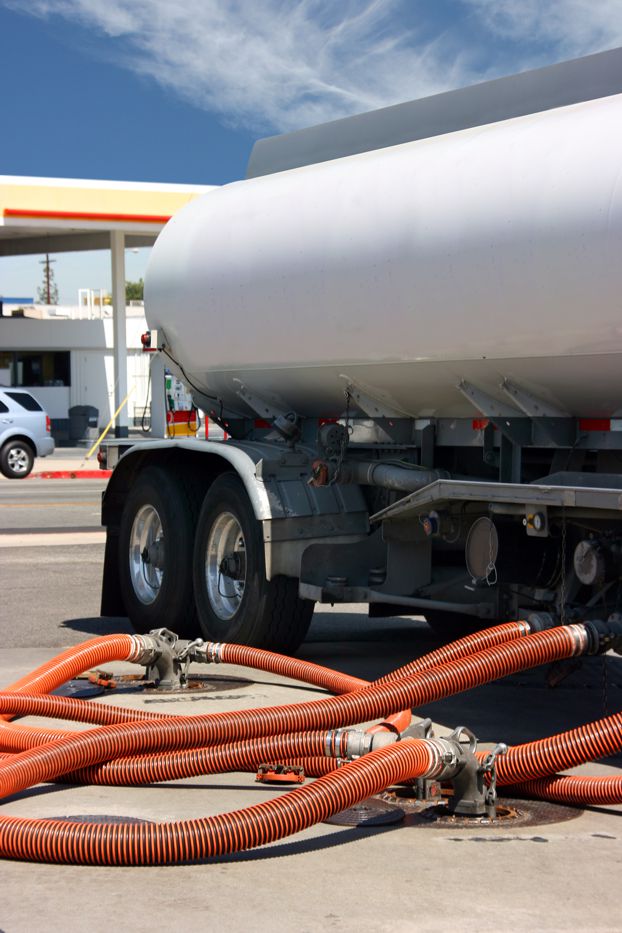 Learn more about the Earth-Rite® II MGV.
Please note this case study is referenced from a third party source and is not in any way linked to the operations of Newson Gale customers.