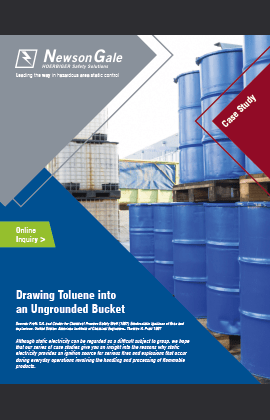 Drawing Toluene into an Ungrounded Bucket 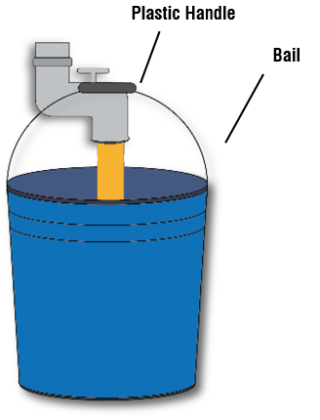 On opening the valve, the operator backed away from the bucket allowing the toluene to flow as he had previously done several times. Within a few moments the toluene had ignited causing the operator to immediately leave the scene returning with a small fire extinguisher, which proved inadequate to put the fire out. The operator then left the scene returning with a larger fire extinguisher, however by the time he had returned the fire was out of control and he was unable to close the valve to prevent the flow of toluene to the bucket which was already over flowing.

The investigation into the incident outlined that the operator had opened the valve and backed away from the metal bucket. The operator stated “I was just standing there looking at it when it caught fire.”

As a result, discharge from the operator could be ruled out as a cause of the incident and the scenario of a streaming current was considered.

Assuming that the toluene flow had continued for 30 seconds, there would have been a charge of 3 µC on the bucket provided that the bucket was completely isolated from earth.

The potential energy on the bucket can be found using the equation:

Where:
(I) Q = Charge on the bucket
(II) C = Capacitance of the bucket

Therefore the potential energy on the bucket:

And the voltage on the bucket can be found using the Equation:

With the breakdown strength of air at 3 x 106 V/m a spark from the bucket could easily jump across a gap of 50 mm (1.96”) meaning it was probable discharge from the wire of the bail to the body of the globe valve could occur.

Using a more conservative approach, the lower streaming current value of 0.01 µA used in the same calculation yields a potential energy of 2.25 mJ, a voltage of 15 kV, and a spark gap of 5 mm (or some 0.19”).

With the MIE of toluene calculated to be 0.24 mJ a potential discharge with energy using the most conservative assumption of 2.25 mJ is still sufficiently high enough to ignite the flammable vapors produced by the toluene present in this process.

How could this have been prevented?

It is highly plausible that this operation had been conducted multiple times without a visible incident occurring with electrostatic sparking taking place in previous operations without a flammable atmosphere being present in the spark gap when discharges occurred. This is a common feature of process operations that have suffered from the consequences of a fire or explosion caused by static electricity.

“Temporary connections can be made using bolts, pressure-type earth (ground) clamps, or other special clamps. Pressure-type clamps should have sufficient pressure to penetrate any protective coating, rust, or spilled material to ensure contact with the base metal with an interface resistance of less than 10 Ω.”

As can be seen from this case study, when highly flammable or combustible products are being handled it is essential to specify certified equipment which will protect the safety of your plant and employees.

Static grounding clamps and cables like the ones highlighted in the image below, are ATEX/FM certified to prevent any physical impedances such as paint coatings, product deposits and rust ensuring a good electrical connection has been made to the equipment’s base metal.

For operations requiring continuous grounding, the next level of protection would be a self-testing earthing clamp with visual indication.

The Bond-Rite® REMOTE is a wall mounted static grounding device which encourages the operator to ground the equipment before the process starts. The ground loop monitoring system ensures a positive connection resistance of 10 ohms or less. Pulsing green LED indicators inform the operator with a simple GO/NO GO instruction that the process is ok to start. 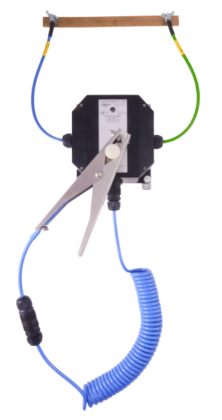 Learn more about the Bond-Rite® or Cen-StatTM Range of products.
Please note this case study is referenced from a third party source and is not in any way linked to the operations of Newson Gale customers.