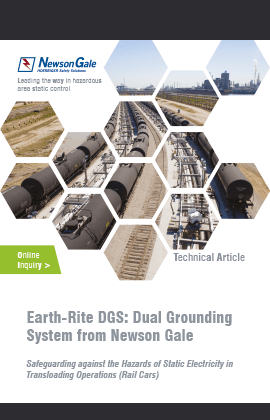 The rail freight industry plays a crucial role in supporting productivity and increasing the sustainability of a country’s economy. In the United States alone, nearly $780 billion has been invested privately since the 1980s to modernize equipment, maintain infrastructure and implement technology of the ever-expanding 140,000-mile US railroad network. It is clear railroads are integral in the transportation of petroleum products. Although rail cars and tank trucks provide a fast and efficient method of loading and unloading hazardous materials, they are an inherently dangerous occupation and have the capability of forming a dangerous and disastrous partnership if not properly controlled, in industries today.

The process of grounding any metallic items of plant equipment used in industrial process operations is fraught with risk, and the nature of a static ignition is somewhat amplified when applied to tank rail car loading and unloading operations due to the size, scale, and proximity of other vehicles within the vicinity that can ignite if a charge were to propagate through the loading facility.

The flow of flammable/combustible material creates a friction build up during product transfer creating an electrostatic charge. Typically, transferring liquids (such as gasoline, diesel, or various grades of crude) and dry bulk products have the capability to accumulate charge.

Whilst the ability to prevent charge accumulation is extremely difficult, there are preventative methods that can be introduced to ensure that charge safely dissipates rather than accumulates to unsafe levels, with an electrostatic voltage of 20,000 volts capable in less than 20 seconds on a rail car. If charge is unable to safely dissipate to earth it will look to equalize its potential at the earliest opportunity on the closest object. The generated charge only becomes a problem in hazardous areas when it is permitted to accumulate on objects that are not at ground (earth) potential. A build-up of electrostatic charge will eventually develop enough to discharge a spark onto an object held at a different potential in an attempt to equalize charge. The common denominator for most incidents is that the rate of electrostatic charge generation on the body of plant/transport equipment is permitted to exceed the rate of charge dissipation resulting in the accumulation of static charges on some areas of the tank truck. Because rail cars have a very large surface area, they can accumulate very large amounts of charge, which in turn, creates the presence of very high voltages on the surface of the vehicle. As charge is being generated it’s creating a rise in potential on an isolated body. The understanding is that the longer it’s left to go on, the higher the potential. With the combination of potential charge accumulation and capacitance of the object, potential spark energy begins to build.

The tracks that railcars run on have their own grounding system and the wheel assemblies have metal-to-metal contacts, so they are always grounded. However, many railcars have wheel bearings that are not conductive, or the wheels are not attached to the railcar’s body, which makes the rest of the carriage assembly electrically isolated. Similar to tank trucks, when railcars are loaded or unloaded, operators should use a railcar grounding system to safely dissipate static electricity. The wear pads on the carriage also isolate the assembly from the tank and fitting, so procedure should dictate that a grounding system should be used during loading/unloading rack product transfers. This is echoed in NFPA 77 Recommended Practice on Static Electricity:

12.4.2 Many tank cars are equipped with nonconductive bearings and nonconductive wear pads located between the car itself and the trucks (wheel assemblies). Consequently, resistance to ground through the rails might not be low enough to prevent accumulation of a static electric charge on the tank car body. Therefore bonding of the truck car body to the fill system piping is necessary to protect against charge accumulation. In addition, because of the possibility of stray currents, loading lines should be bonded to the rails.

Whenever railcars and workers interact, there’s potential for serious injury or death.  Communication is key, whether it be verbal from a colleague or visual from a safety system integrated alongside daily working practices. There is no room for error with a 60-tonne railcar, never mind when static as a potential ignition source is a prevalent risk.

Workers and process operators rely on systems to provide visual indication to confirm that a good low resistance connection to earth has been established. The Earth-Rite® range of systems from Newson Gale removes assumption and doubt away from the operator by providing the most comprehensive method of protection over electrostatic ignition hazards. All Earth-Rite systems contain advanced electronics that continuously monitor the resistance between the equipment requiring static earthing protection and the site’s designated earthing point, LED indicators for operator visual verification and internal volt free contacts that can control the flow of product or control additional attention-grabbing LEDs. 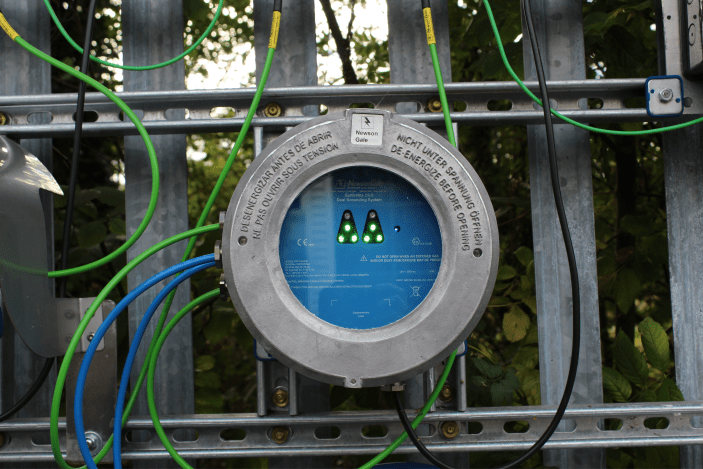 The Earth-Rite® Dual Grounding System (DGS) has two independent ground monitoring circuits that allows operators to ground and continuously monitor two items of metal conductive plant equipment concurrently, such as two bulk transportation vehicles or other metallic vessels like Ex IBCs and metal drums. This feature is commonly used to ground tank trucks and railcars during transloading operations or to ground up to two tank trucks or railcars that are being loaded/unloaded at dedicated loading rack installations. If these vessels encounter electrostatically charged liquids and powders, they have the potential to accumulate hazardous levels of electrostatic charge that has the capability of discharging static sparks with energies far in excess of the minimum ignition energies of a vast range of combustible gases, vapors and dusts. 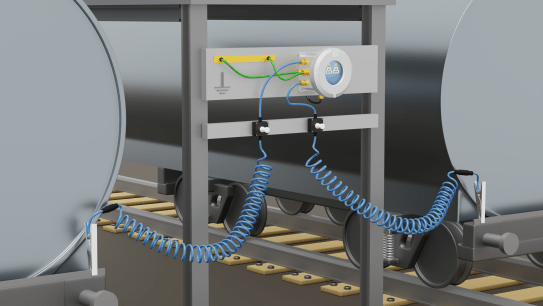 The unit’s explosion proof aluminum enclosure houses attention grabbing high intensity LEDs that inform operators when the system is in a permissive or non-permissive state. The flashing green LEDs provide process operators with a continuous visual reference point that enables them to monitor the ground status of conductive metal equipment capable of accumulating static electricity. The DGS system allows engineers, operators and HSE professionals to comply with international standards, guidance and recommended practices, as each ground monitoring channel ensures a resistance of 10 Ohms or less throughout the duration of the process as outlined in IEC TS 60079-32-1, NFPA 77 and API RP 2003.

What is clear from these recommendations is that 10 Ohms in the grounding and bonding circuit is the maximum resistance recommended for equipment at risk of electrostatic charging in EX/HAZLOC atmospheres. While API RP 2003 goes one step further in recommending 1 Ohm or less, if a grounding system with ground status indicators is in use, 10 Ohms or less is satisfactory. This is because the grounding system is continuously monitoring the resistance in the grounding circuit, so that if it rises above 10 Ohms, the grounding system can signal this potential hazard to the operator of the loading gantry. Another important recommendation to use interlocks wherever possible, to ensure the transfer does not take place if grounding is not present. By halting the movement of product, the charge generation source is mitigated thus preventing additional charging of the rail tanker. Process operators and HSE professionals who can demonstrate compliance with the relevant published standards take a forward-thinking approach to safety.

A HAZOP risk assessment will identify hazards, evaluate the associated risks and provide guidance on the subsequent control of the hazards. To help control these risks, Newson Gale offers a wide range of static grounding and bonding equipment which is designed to provide optimum safety in explosive atmospheres for a variety of process applications. The Newson Gale product range mitigates static charge accumulation by using practical and innovative design and ensures effective static control on three levels – grounding and bonding clamps, visual verification and interlockable control systems.

Newson Gale has been providing static grounding and bonding solutions to the hazardous process industries for over 40 years. In that time we have developed a wide range of solutions, and many “industry firsts”, to cater for a wide range of industry processes, installation settings and end user preferences. Our hardware is designed to support our customers in demonstrating compliance with industry guidance like IEC TS 60079-32-1 and NFPA 77 and all possess the necessary and most up to date ATEX, IECEx and North American hazardous area approval certificates.

Whether your communication preference is through e-mail, video conferencing or by phone our global team of sales engineers will be more than happy to discuss your processes and outline the range of grounding and bonding solutions that match your requirements.

If you have any questions relating to the topics discussed in this article, please contact Newson Gale.