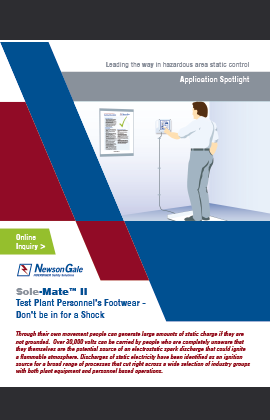 Through their own movement people can generate large amounts of static charge if they are not grounded. Over 30,000 volts can be carried by people who are completely unaware that they themselves are the potential source of an electrostatic spark discharge that could ignite a flammable atmosphere.

Discharges of static electricity have been identified as an ignition source for a broad range of processes that cut right across a wide selection of industry groups with both plant equipment and personnel based operations.

Static charge accumulation on workers can be mitigated by issuing them with footwear that is designed in accordance with EN ISO 20345:2011 and ASTM F2413 safety standards or recommended practice documents like NFPA 77 and IEC TS 60079-32-1 that incorporate static dissipative properties in the structure of the footwear.

Static dissipative footwear is designed to mitigate hazards that may arise due to excessively high footwear resistance with respect to ground. Regular testing of static dissipative footwear is strongly recommended to ensure the static dissipative properties of the shoes do not change during the duration of their use. The provision of footwear to plant personnel only reduces the risk if properly maintained, and this cannot be detected by visual inspection of the shoes alone. It should therefore be a fundamental requirement of organizations that have employees handling flammable and combustible materials in hazardous environments to ensure that the product is capable of fulfilling its designed function of dissipating electrostatic charges. There is an obligation to perform electrical resistance tests via in-house footwear testers. 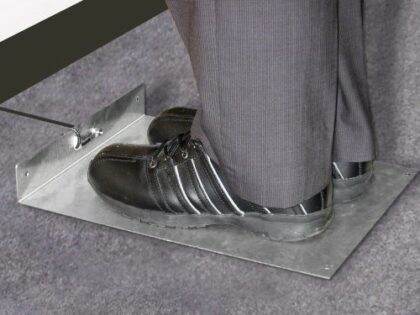 The Sole-MateTM II tester from Newson Gale provides a time efficient and cost effective method of ensuring personnel operating in hazardous areas are wearing static dissipative shoes that are capable of mitigating electrostatic charge accumulation on their bodies. The system tests the condition by checking the resistance of the footwear to ensure static is capable of dissipating from personnel through their shoes to ground. 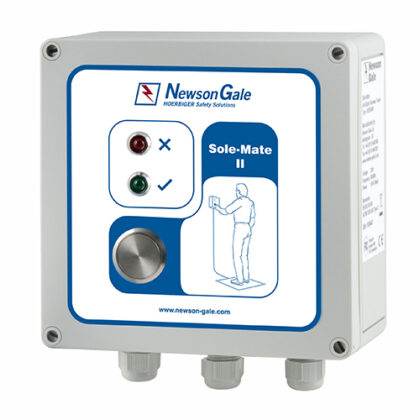 “Resistances can be measured with commercially available footwear conductivity testers which measure the resistance between a hand-held metal bar via body and feet to a metal plate on which the person stands. Alternatively, the resistance between a shoe filled with shot pellets and a steel plate on which the shoe is pressed can be measured according to IEC TS 61340-4-3.

The resistance of footwear can increase with the accumulation of debris on the footwear, use of orthopedic insoles, and reduced floor contact area. The conductivity of footwear should be tested frequently to confirm functionality.”

* Always check for and read the latest version of the International Standards, Guidance and/or Recommended Practices.

The Sole-Mate II testing station is typically located at the entrance to a hazardous area and plant personnel are provided with a quick ‘pass’ or ‘fail’ reading instantly. If the resistance of the shoes is too high, the Sole-Mate II tester will indicate that the shoes have failed the test via a red LED and buzzer alarm. If the shoes pass the test a green LED will indicate to the operator that the shoes are fit for purpose. For those companies that want to interlock the system to certain areas of their facility with entry access or audible alarms, an integral volt free relay contact makes it possible for the system to prevent access to a hazardous area without a pass reading on the tester, indicating that only suitable footwear is being worn upon entry.

It is not uncommon to find that footwear fails; after-all that is what the tester is designed to do. If footwear fails due to conditions – these present a risk as it indicates there is not a dissipative path through the person to ground to the required standard (for example, EN ISO 20345) and this presents a risk to operators and other plant personnel on site. 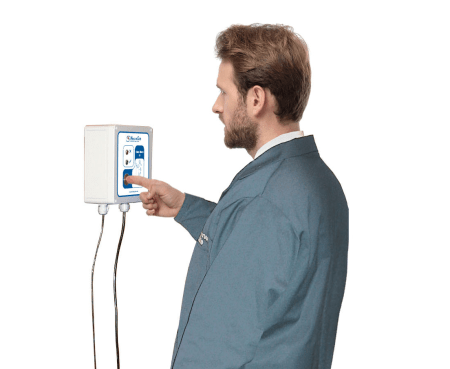 It is important to consider factors that could affect the resistance between the test button and foot plate. The electrical resistance of static dissipative footwear can be changed significantly by a number of factors such as (to name a few):

Newson Gale has been providing static grounding and bonding solutions to the hazardous process industries for over 40 years. In that time we have developed a wide range of solutions, and many “industry firsts”, to cater for a wide range of industry processes, installation settings and end user preferences. Our hardware is designed to support our customers in demonstrating compliance with industry guidance like IEC TS 60079-32-1 and NFPA 77 and all possess the necessary and most up to date ATEX, IECEx and North American hazardous area approval certificates.

Whether your communication preference is through e-mail, video conferencing or by phone our global team of sales engineers will be more than happy to discuss your processes and outline the range of grounding and bonding solutions that match your requirements.

If you have any questions relating to the topics discussed in this article, please contact Newson Gale.