Static electricity is often perceived as an invisible risk. This case study explains why static electricity provides an ignition source for serious fires and explosions that could occur during everyday operations involving the handling and processing of flammable products.

A company supplying aluminium powder had an order cancelled when the bulk truck transporter carrying the powder was en route to a railcar hopper loading station. The truck driver was instructed to return the aluminium to the plant from where it was manufactured. As this scenario had never occurred before there was no standard operating procedure in place to offload the aluminium from the truck back into the production facility. Shortly after the operators had worked out how to overcome some practical challenges for moving the powder back into the plant, an explosion occurred which propagated throughout the plant.

On return to the plant it was noted that there was no direct loading point for the finished powder to be injected back into the production stream directly from the truck. A decision was taken to convey the powder into the pneumatic transport system entry point of the plant using the 3” hoses on the truck. Unfortunately the hoses could not reach the entry to the plant’s pneumatic system so an additional length of hose from the plant was added to the line of 3” hoses running from the truck. Both hose types were constructed of rubber tubing that contained internal metal helixes that ensured the hose flanges were electrically bonded together.

The truck was grounded so the 3” hoses (assuming they were in good condition) were also grounded, hence the risk of an accumulation of electrostatic charge on the truck and hoses was minimal. One issue that was encountered, however, was that the plant hose that was used to complete the distance between the truck’s hoses and the entry to the plant’s pneumatic system was wider in diameter to the truck’s hoses. This meant that a sealed connection between the hoses could not be made.

The operators overcame this issue by stuffing rags into the gap between the hose flanges. This had the effect of electrically isolating the plant hose from the truck’s hose, potentially impeding the transfer of electrostatic charges from the plant hose to ground via the grounded truck. The other end of the hose was assumed to have been resting on the concrete floor inside the plant. The other issue was that the density of the air-powder phase coming from the truck was above the minimum explosive concentration of the aluminium powder.

As the operators needed to improvise through this non-standard scenario, it is all too easy to criticise the lack of static grounding precautions that were adhered to. Electrostatic hazards are not an easy concept to grasp, especially when improvisation is required. One standard operating procedure that may have re-enforced good practice was to have the truck driver trained to test the electrical continuity of the hoses back to the grounded truck. This would enable the driver to ensure a transfer could not take place unless all components in contact with the charged powder were grounded. One means of achieving this is for the driver to carry out a resistance check with an ATEX/HAZLOC certified ohmmeter (or multi-meter) to ensure the combined resistance of the hoses does not exceed unsafe levels. 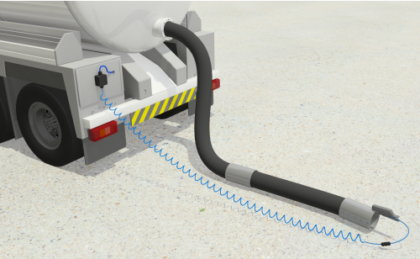 If there are concerns about the correct use of the meter an even simpler method is to utilize a device like an ATEX/HAZLOC certified OhmGuard® tester which provides the driver/operator with a visual indication of whether or not the hoses assembled together exceed safe resistance levels. By simply attaching one end of the OhmGuard to the truck and the other end, which houses the LED indicator, to the end of the interconnected hoses, the tester will automatically determine if the resistance through the hoses is higher than recommended levels. Following a “GO/NO GO” principle of operation, the pulsing green LED indicator visually confirms that the resistance of the interconnected hoses is low enough to dissipate electrostatic charge from the hose, preventing ignitable sparks being discharged into combustible atmospheres.

Learn more about the OhmGuard®.
Please note this case study is referenced from a third party source and is not in any way linked to the operations of Newson Gale customers.