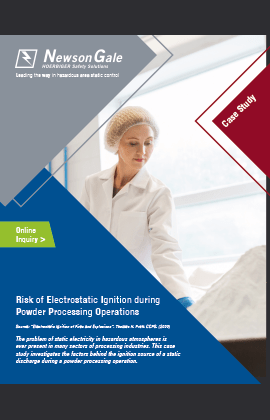 This case study investigates the factors behind the ignition source of a static discharge during a powder processing operation.

Pneumatic transport systems represent the heart of any granular bulk material handling system throughout many industries today. Being an efficient method of transporting granular material, such systems allow for quick transportation of powders between processes enabling companies to keep up with an ever growing demand on production. However, such processes are not without their risks. When the product being processed is considered combustible and has an appreciable portion of fine material, the potential for having an explosion increases dramatically. Fine powders with low MIE (minimum ignition energies) will regularly reach the MEC (minimum explosive concentration) along the conveying system and may be at risk of combustion by several sources of ignition. One such ignition source is electrostatic discharge.

Pneumatic conveying systems have the ability to generate vast quantities of electrostatic charge via the movement of product through the plant equipment. The most common method of electrostatic charging on such process operations is tribo-electrification, which is simply the contact and separation of the powder with the walls of the processing equipment, the powder molecules itself or other factors that can cause charging, like surface contaminants.

In this incident a process operator working on a pneumatic conveying system heard a crackling noise when powdered material was being transported between the classifier and the loading hopper. During investigation of the noise, the operator came into contact with a section of the duct and received a signification static shock.  Although the operator was unharmed, the severity of the incident warranted a full system shutdown to investigate how static charges had been able to accumulate on a particular section of ducting.

During the inspection the duct was examined and it was identified that the section of duct was not suitably grounded.  When tested it was found the duct had a resistance path back to ground well in excess of 1011 Ohms, exceeding the recommended resistance of less than 10 Ohms for metal plant items in good contact with ground, stated in IEC TS 60079-32-1:2013, Explosive atmospheres Part 3201: Electrostatic hazards, guidance*.

Further inspection found that the unusually high resistance was a result of a single grounding clip that had not been properly installed after a clean down operation. Consequently, the piping between the two ducts acted as an isolated conductor resulting in the accumulation and subsequent generation of charge.

The lack of continuity to ground meant that the charge could not be dissipated, allowing an excessively high voltage potential to develop on the duct which eventually discharged onto the operator. Given the high rate of charge generation and spark discharge by a poorly fitted grounding clip; a  review of grounding and bonding of all metallic parts was carried out. The inspection scrutinized the grounding and bonding integrity of all equipment units, all sections of ducts, bags and cages in the bag filters. As a result many deficiencies were found and swiftly rectified.

*Always check for and read the latest version of the International Standards, Guidance and/or Recommended Practices.

The nature of a powder processing operation means that the generation of static electricity is to be expected in all parts of the system because of the movement of the particles through equipment. Therefore, regular maintenance is required to stop material from clogging up the machinery. Regular disassembly for cleaning and maintenance can result in bonding connections being missed or not made correctly when the equipment is reassembled. Vibration and corrosion may also degrade assembly connections so it is imperative to ensure that no parts in the assembly become isolated from a true earth ground.

Fortunately in this particular scenario, a larger scale incident was avoided by the luck of an operator. If the isolated ducting had not been found the outcome could have been very different.  A static discharge in the right place through a combustible atmosphere along any section of ducting could have resulted in a significant ignition incident, putting the lives of employees and plant assets at risk.

The most effective way of ensuring complex equipment used in powder processing operations cannot accumulate static electricity is to provide a dedicated static grounding solution that is capable of monitoring the ground connection to components at risk of isolation. Such a solution should also be able to halt the flow of product and alert personnel to a potential hazard should a component lose its connection to ground. This is especially important if the ground connection point to the equipment is not readily visible or isn’t easily accessible for example, the grounding clips mentioned in this scenario.

What actions could have been taken to prevent this incident?

It is highly plausible that charge accumulation on an isolated ducting section had resulted from a misplaced grounding clip multiple times during previous operations without a visible electrostatic ignition incident ever occurring. Without a flammable/combustible atmosphere being present in the spark gap when such a discharge occurs, frequent discharges could have regularly gone unnoticed. This is a common feature of process operations that have suffered from the consequences of a fire or explosion caused by static electricity.

The first place to start is to determine why electrostatic charge was “permitted” to accumulate on the section of ducting. In this case electrostatic charge had been allowed to accumulate because the loss of continuity resulted in the section being electrically isolated from the general mass of ground. Had the section been connected to a true ground, charge would not have been accumulated on its surface. Instead excess electrostatic charges would simply have found their way to ground. So in accordance with industry guidelines like IEC TS 60079-32-1 and NFPA 77, the isolated section (in this case the length of ducting) should have had continuity through to a verified ground with resistance of 10 Ohms or less.

Powder processing equipment presents more of a challenge compared to standard applications as there are metal parts that can make up larger assemblies that can be electrically isolated from each other. The risk of removable sections becoming isolated conductors will occur it:

The Earth-Rite® MULTIPOINT II problems by ensuring that all parts of the equipment have continuity through to ground with a resistance connection of less than 10 Ohms.  The reliance on human intervention to perform regular resistance checks is alleviated due to the monitoring and interlocking capabilities of the Earth-Rite MULTIPOINT II. 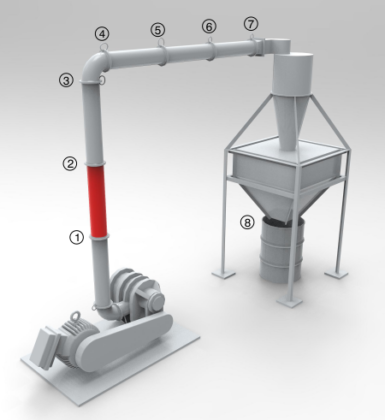 In this example, the system is configured to ground 7 sections of ducting (1 – 7) and a drum (8). Each channel is individually monitored back to ground to a resistance of less than 10 Ohms and interlocked with the control equipment responsible for the flow of product. All monitored channels including the drum (1 – 8) need to have a path to ground (via bonding straps or grounding clamp) before the system will go permissive allowing the operation and flow of product to commence.

If the loss of continuity between one of the ducting sections to the verified earth ever occurs, the system will go non-permissive and the operation will cease to continue. The system only permits the product transfer process when the ground loop resistance of each utilized channel is less than 10 Ohms, as recommended in the various international standards for the control of undesirable static electricity.

The system has cCSAus, ATEX and IECEx approval for use in hazardous atmospheres and meets all current EC directives. 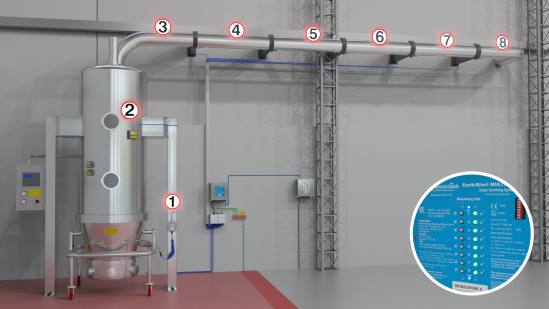 This example demonstrates the Earth-Rite MULTIPOINT II system grounding and monitoring multiple parts of the conveying system which could be at risk of isolation.

Learn more about the Earth-Rite® MULTIPOINT II.
Please note this case study is referenced from a third party source and is not in any way linked to the operations of Newson Gale customers.